General discussion on all labradoodle-related matters - anything not otherwise covered by specific forums on the site.
Post Reply
123 posts

Little guy! He's settling well... Just keep an eye on him when he's in the front as doodles are such loveable characters, someone may be tempted...
We have to keep Ianto on a lead in the new garden as he's found an exit from the back garden!
Toilet training is going really well Roker, keep it up lad!
Anne & Ianto x
Top

Hope it's been OK over Christmas?

If it's any help, I think the first six weeks with a new pup is a slog, no matter how delightful they are at times. I remember quite vividly thinking "oh god, what have we done" when Woody was little. He'd be doing really well and we'd be starting to relax and enjoy him, and then there'd be a little puddle. And then there'd be the nipping at the kids arms and ankles with incredibly sharp teeth, holes in clothes, getting ridiculously over excited, all that stuff.

He's been a star over xmas coping with all the comings and goings of visiting both parents on xmas day with just the one accident at my parents but a rather amusing spell where he sat and watched golf on the telly for about 10mins then fell out with his reflection in the living room fire front then on Boxing day he coped with our house having about 12/13 visitors including another dog. He's now climbing the walls to get out and whilst its only been 6 days since his last jab i'm going to take him down to a friends later when i walk down to return some stuff. Its about a 20min walk there and back.

We had a rather amusing visit from some friends with their Beagle and whilst for the first bit of the visit Roker really wasnt sure after about 20mins he wouldnt leave Beau, their Beagle, alone and after an hour Roker was still bounding around a very tired and given up Beagle!

If anything i think the holiday period has given us a really good opportunity to integrate him into seeing other people and dogs and he's learning every day from all of it. New Years Eve he was showing himself off to our friends few month old baby and was well behaved and then the following day two sets of friends came round both who have 2 year old kids. One of the couples have a dog already and their little girl had no qualms in playing with Roker and not being put off by his jumping about but once he'd settled even the other little boy got more confident and was playing with him.

In terms of training he is nearly there in terms of house training.....after me spending a lot of cold hours in the garden! We havent had a poo in the house since a couple of days of him arriving bar one lapse which was completely out of the blue and was a complete one off. In terms of wee he is starting to run to the back door and knows he needs to go out and 95% of the time we manage to do it...when he doesnt its generally because he hasnt been able to hold on long enough. We still get the odd wee from excitement but we cant really complain with the progress he's made in three and a bit weeks with us. He is also sitting on command to get treats and toys etc but with getting over some of the early things it has now brought along his noseyness to get upstairs and see whats happening. We are persevering so far without a stairgate and training him to get down when we say which seems to be making progress. Chewing stuff isnt to bad bar one part of an old settee which we keep stopping him doing and a bizarre infatuation with a toggle on the bottom of one pair of tracksuit bottoms i own!!

Fair to say he is now a firm part of the family and one of the best things we've done in getting him. A new chapter starts on Thursday with his first puppy training class...its going to be eventful!!

Couple of photos below of him focused on the golf and posing for a photo for a friend of ours then a vid of him tormenting the beagle!!

I back up my photos to a cloud drive so i've organised all the ones of Roker into a special folder that i've shared...hopefully the link below will let you see them all...

Any more i take in the future should hopefully show up as well.
Top

Well just over 17 weeks in and i managed to get Roker to stand\sit still long enough to weight and measure him this morning. He was about 15 inches tall to the shoulders, breeder said he would be between 17 and 19 inches when fully grown, and weighed in at 9.8kg...i think he may end up being a little larger than she anticipated!

That said he is becoming a fantastic personality....lost count of the number of times i get stopped when walking him so folk can meet him!
Top

jonb wrote:...lost count of the number of times i get stopped when walking him so folk can meet him!

You'll have to get used to that one...!! We were accosted twice yesterday, and that's just on home turf...

It's one of the joys of having a doodle!
Anne & Ianto x
Top

Its even worse when he comes to the pub with us! We often go to the Grouse down on Brampton and he's currently the star of the show in there...was in on Saturday evening for the Rugby and he spent more time sat with a table of four girls than he did with us!
Top

Knowing how folk like a photo on here thought I'd share this one of Roker this evening....camera shy as usual!!

Now I'm confused....did this on my ipad and the pic shows...doesn't for you or me on my iPhone!! Joys of IT and I work in IT support!!!

I'll have another go shortly!!
Top 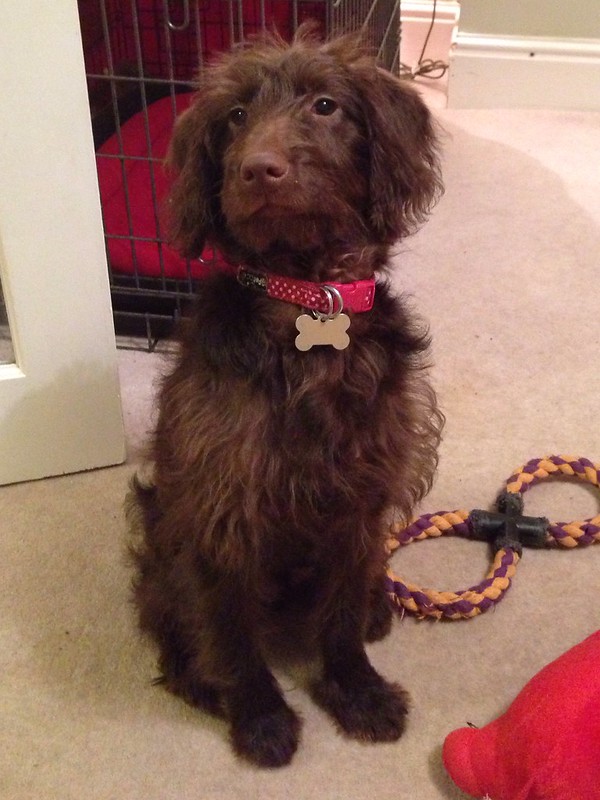 Hello Roker - well worth the wait!!

Aw, he's lovely!
A bit like our Sam, though a bit shaggier. Sam's 16 weeks but not weighed or measured him , will need to do that and see how he measures up.
How's he getting on?. Sam's a great wee thing, finally sleeping through most nights ...

He's probably about ready for a tidy up trim although when he's brushed he doesnt look as shaggy...for about 30 seconds until he wanders away and gives himself a good shake and he's all shaggy again! Folk constantly think he is some sort of spaniel!

He was 19 weeks on Sunday and he's doing well....we were fortunate with the sleeping in that he took to his crate almost straight away and slept through pretty much from the start. Few occasions where he woke at 5am'ish but you nipped him out for a wee and then he would go back down. These days he tends to go to bed about 10pm and you dont hear from him until about 7am'ish. He's just starting to finally settle down with us when we are around the house rather than tearing around always wanting to do something, he spent Monday night curled up next to me on the settee chewing on a toy bone he has. His teeth are coming through so there is plenty of chewing going off but to date all we seem to have lost is one old settee cushion and he destroyed a toy my mum bought him the other day in one sitting!
Top

His coat's very similar to Ursa's - her coat's probably not quite so long, but the waviness and texture is very similar. (She's just back from the groomers in this picture, so she looks much tidier than usual!) His head is similar too - Ursa's head is quite spanielly at the moment, and certainly broader in the muzzle than her poodle forebears. There's also a very clear break at the end of the nose and before the dome of the cranium, rather than the gradual slope from muzzle to skull.

It's funny how, at 16 weeks, she's suddenly not so clearly a puppy any more - I've had to explain to people surprised by her sudden explosions of excitement that she's still very young. Until very recently she was obviously a little 'un; now she does look a bit like a fully-grown spaniel (albeit a spaniel with small ears).