This forum is for posting reviews of dog- and labradoodle-related /products/. Please do not use it for making or soliciting comments about breeders or people (although /most/ breeders are people too!)
Post Reply
14 posts • Page 1 of 1

I bought Ianto one of these yesterday -
http://www.petsathome.com/shop/en/pets/ ... r-football
(though his is an attractive lime/yellow colour

)
He absolutely loves it! Well, the noises it makes to be precise - and the fact that its shape means it bounces in odd directions. If your sister-in-law has ever bought your toddler a drum for Christmas you'll know how I feel... But he plays with it delightedly for ages, then has to go for a good snooze! I think they come in different sizes and I'm not sure how 'indestructible' they are for very strong chewers but Iant is a medium dood who's just learning that if you don't tear a toy apart, you don't get it taken away...

Cheers, Anne. Will need to have a look next time I'm there. Glad Ianto's happy with it. X
Top

That sounds like something Baxter would love Anne, thank you

Trip to P@H this weekend is in order then!!!

That looks like fun Anne, will probably have to take it off George when we are not watching him though or it wont last long!

As an update... the Nerf football isn't too keen on slobber - I've had to employ the hairdryer! (Though Ianto's donkeydoodle chum, Lottie, has helped him to play with his fav toy this afternoon!!) Once the hairdryer has done it's work on the squeaker bit he's off playing again....

Along the line of this sort of toy i've found Roker loves the stuff from Kongs squeakair range. He initially had a few tennis balls of varying sizes from that range but they became a bit of a pain when out walking where we are either bouncing or nosed into hedge bottoms etc. Got a couple of the fetch sticks from the range and they are great as they hit the floor and slide along rather than bounce at strange angles. As a treat for moving into the new house i got him the dumbell shape one and he has been sat squeaking that left right and centre this last week!

This is the fetch stick :- 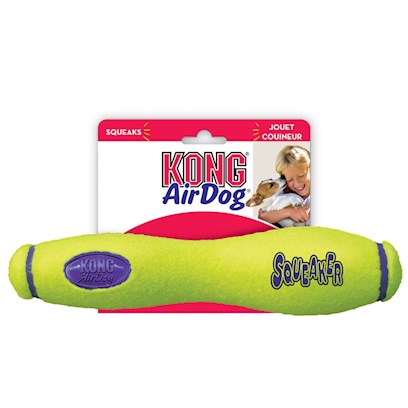 This is the dumbell :- 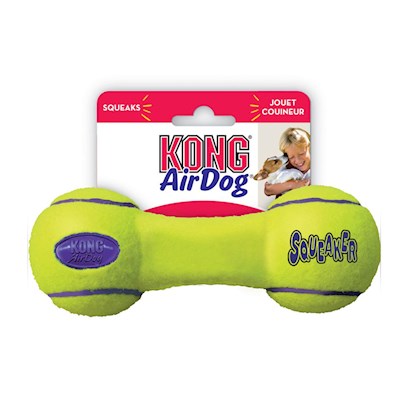 Shopping around i've found them about £4/£5 each on either eBay or amazon.
Top

If it squeaks, I'm gonna try it....!
The Nerf ball is currently silent, folks, as the squeaker has (like many other before it) become detached and is now rattling around inside the football...

Ianto gives it a disconsolate chew every so often... it may be the donkeydoodle treatment, or the hairdryer that caused it... Oh, for a reliable squeaker toy!!
Anne & Ianto x
Top

Stout has a ball that bounces in random directions, but he has learnt if he catches it before it bounces it doesn't

it is slower than a tennis ball. No squeaker bug it gets chewed.

Re squeaky toys he has two plush puppies toys. They squeak even when chewed to death, which drives us slightly mad, but stout loves them

Just checked out the Plush Puppy range - Ianto has one of their 'Invincibles' (we call it the Bill, the Platypus, it's got four compartments and still works despite a good chewing). But I love the look of the 'Tuff Guys'.... Tony seems to have an extremely hairy back!

Within half an hour the red living room carpet was bright green as the covering was ripped to shreds but i'll give them their due it still squeaked and there wasnt any stuffing spread around! The toy is now in the box where we keep a load of his stuff and hasnt seen the light of day again!
Top

Doodle Dee,
I can't find it on the P@H website at the mo. but Ianto's has four compartments (each with a different sounding squeak) and is kind of blue... He's chewed the 'corners' off, but the squeaks are still going... you don't have to leave them alone with them

But he so loved his Nerf football... it hurts to see him trying to squeak it....

Anne & Ianto x
(I'm taking it back tomorrow to see what can be done about it.)
Top

Try this from the chuck it range. I got Tess one about six weeks ago and it's like new. We play with it every day. It is light, bouncy, doesn't hurt to kick it or hurt her if it lands on her. It has ridges so she can carry it. Tess likes you throw something and then she brings it to you to play tug with or she runs off by herself to chew it to bits. She loves her wubba but she destroyed it within half an hour and now it's still alive but only just.
She's got the biggest one as she is standard. You might need a smaller one for the minis.
It's the best toy we've had and I can see it lasting ages.
She's had those hard balls but she can't carry them back so you have to go fetch yourself. We've had the big heavy one with two handles but that would brain her if it hit her and busts your foot if you kick it.
It doesn't squeak though. They do masses of other balls and flyers and odd angle bouncers. I haven't tried those but I imagine they are good too.
I can't recommend it highly enough and it's the first "virtually indestructible" thing we've had that is actually really good fun and not boring because you can't chew it to bits! Xx

Well, Ianto's Nerf Football took a trip back to Pets at Home this afternoon and a full refund was given without any query... I wonder if they're used to them returning de-squeakered??